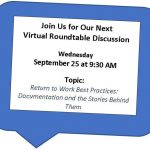 performing to return their injured workers back to work. Having an official documented Return to Work (RTW) program creates a culture of understanding with all workers, leaders and stakeholders within an organization.

Over the last year, I have met many of our members and it is clear to me that the Trust Members see the financial value of this program. There are several financial incentives in returning your injured workers back into their district. You are increasing the value of your worker, while simultaneously making the employee feel more valued in their job.

Forming an RTW program consists of analyzing the barriers, reviewing current practices, and considering best practices used in and around the workers’ compensation system. The School District environment has many political, union, and hierarchical considerations to explore when developing an RTW System that will meet the needs of a district. RTW Intervention consists of analyzing the complexities of the workforce, needs at the school level (filling an injured worker’s position while away), the current RTW Culture, and assessing the benefit / risk of returning an injured worker back into the job from which they were injured. In adopting a system, districts have internal resources (RTW Coordinators) who have developed organizational practices on how they return their workers into light duty jobs. Best practices state that having current and accessible documentation about what happens if a worker is injured creates the stepping stones to a culture change in the workforce.

When an employer is committed to returning their workers back to work in some capacity, the employee feels like a more valued member of the institution. Documentation removes confusion from the above-mentioned barriers and increases the psychosocial aspects of the employee /employer relationship.

Those Districts that have successfully documented their RTW programs have chosen a variety of ways to share their program information to their workers, such as through intranet, outfacing websites or on a case by case basis.

Documentation consists of information on how to file a claim, the responsibilities of the stakeholders, an explanation of how the district’s RTW Program works, plus a commitment by the district to return injured employees to meaningful work while they heal. Documentation of the roles and responsibilities of stakeholders in a claim, and then the sharing of information with employees is an instrumental component toward being approved to participate in the PSWCT RTW Incentive program.

Returning your workers back to work sooner effectively decreases your time loss days, thereby reducing your total claims costs and annual rates. Showing a worker that they are an important part of your district increases employee retention. Returning most workers back to their job of hire quickly reduces the need for recruitment, retraining, and even reinjury.

All these financial incentives increase the overall value of your district and your employees.